The fundamental solution is always related to a specific partial differential equation (PDE). For some equations, it is possible to find the fundamental solutions from relatively simple arguments that do not directly involve "distributions." One such example is Laplace's equation of the potential theory considered in Green's Essay.

The function f that satisfies Laplace's equation is called a harmonic function. 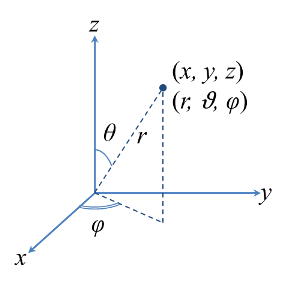 In the spherical coordinate system

Laplace's equation can be re-written as follows:

Let us now consider the problem of an unbounded space containing a point source (e.g. heat source) of unit strength. We can choose the coordinate system in such a way that its origin is located at the same point as one of the sources.

It is clear that the function f (e.g. temperature in steady-state heat conduction) is symmetric, as there is no reason for it to vary differently in the directions of different angles? and ?. This means that all the derivatives of function f with respect to those angles vanish, and the function satisfies the following ordinary differential equation

that has a following simple solution

From the theory of ordinary differential equations, we know that the constants can be found from the additional boundary conditions. The space is unbounded, so the condition at infinity is one of those boundary conditions. The constant should be equal to zero if we are looking for the solution that vanishes at infinity. The function f should also satisfy the conservation law, which for potential problems means that the flux from the unit source must be equal to the total flux across any surface S that surrounds it.

Assuming that the surface S is a sphere with the radius ? one can mathematically formulate the law as

from which it follows that the constant should be equal to 1/(4?).

We assumed above that the origin of the Cartesian coordinate system coincided with the point source. By moving the origin to some point x'(x', y', z'), one can obtain a more general form of the fundamental solution

where the distance r between the point x'(x', y', z') of the applied source and the point x(x, y, z) is defined as follows

This solution satisfies the Laplace's equation everywhere except for the point x'.

The fundamental solutions of partial differential equations are generally formulated for infinite domains. In some cases, it is possible to find solutions to the governing differential equations for domains with additional boundaries or for finite domains knowing the conditions on some parts of these boundaries. In such cases, these solutions are called Green functions. There are several techniques to obtain Green's functions (the method of images, Fourier transforms, etc.) In most cases, Green's functions can only be found numerically.